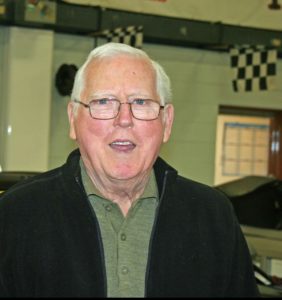 The Chicago Region SCCA is pleased to announce the “Chicago Region Member of the Year” award, created in 2016 to recognize outstanding service to the club, is being renamed in honor of long time Chicago Region member Burdette “Berdie” H. Martin Jr.  At its March 8, 2017 regular meeting the Region’s Board of Directors voted unanimously to recognize Berdie for his long and outstanding career within the amateur and professional motorsports world.  Berdie became a member of the Chicago Region SCCA in 1950 and in 1954 entered his first SCCA regional race at Wilmot driving a MGTC.  He competed in road racing for nine years that included the first race at Road America in 1955 and the first Chicago Region June Sprints® in 1956.  The last road race Berdie competed in was the Sept 9, 1962 RA 500 in a Lola MK1 at Road America.

Berdie then became active as an official with the SCCA and in 1965 became the organization’s chief steward. In 1967 he was elected to the Chicago Region’s Board of Directors and in 1969 he served as Regional Executive of the Region.  In 1972 he was given the SCCA’s highest award, the Woolf Barnato Trophy and in 2010 was inducted into the SCCA Hall of Fame.  In 2013 Berdie was awarded the Chicago Region’s Founders Award.

In the early 1970s he served as chief steward for Trans-Am, Can-Am, Super-Vee and North American F1 races.  By 1974 he was assistant director of the SCCA’s racing department.  In 1971 Berdie became a board member of the Automobile Competition Committee for the United States (ACCUS), the sporting authority of the United States which governs U.S. racing as part of the Federation Internationale de l’Automobile (FIA).  Subsequently in 1983 he was appointed president of ACCUS and he later served as a Vice President of the FIA.

In 2004 Berdie retired from his position with ACCUS and returned to his roots within the motorsports community.  He now participates in many of the Chicago Region’s activities and is a resource of knowledge and guidance for the current Region leadership team.

The “Member of the Year” award is presented to a Chicago Region member who has demonstrated support of the Chicago Region SCCA and the candidate’s contribution or achievement was and or is a benefit to the Chicago Region and or its membership.  When the award was created it was determined it should not be named in recognition of any one member.  Conversely, when the proposal for this recognition was brought to the Region’s Board, the award originator, past “RE” Steven Laske was asked for his thoughts.  Steve wholeheartedly supported the proposal, stating “there is no other person that is more deserving of this recognition; Berdie is a true example of the meaning of this award through is dedication and service to the racing community”.

Berdie, on behalf of the Chicago Region’s membership we thank you for all you’ve done and continue to do.  We are honored to have the ability to recognize your many contributions to motorsport by adding your name to Chicago Region’s most prestigious award   and look forward to presenting the “Berdie Martin Member of the Year” award to deserving Chicago Region members.