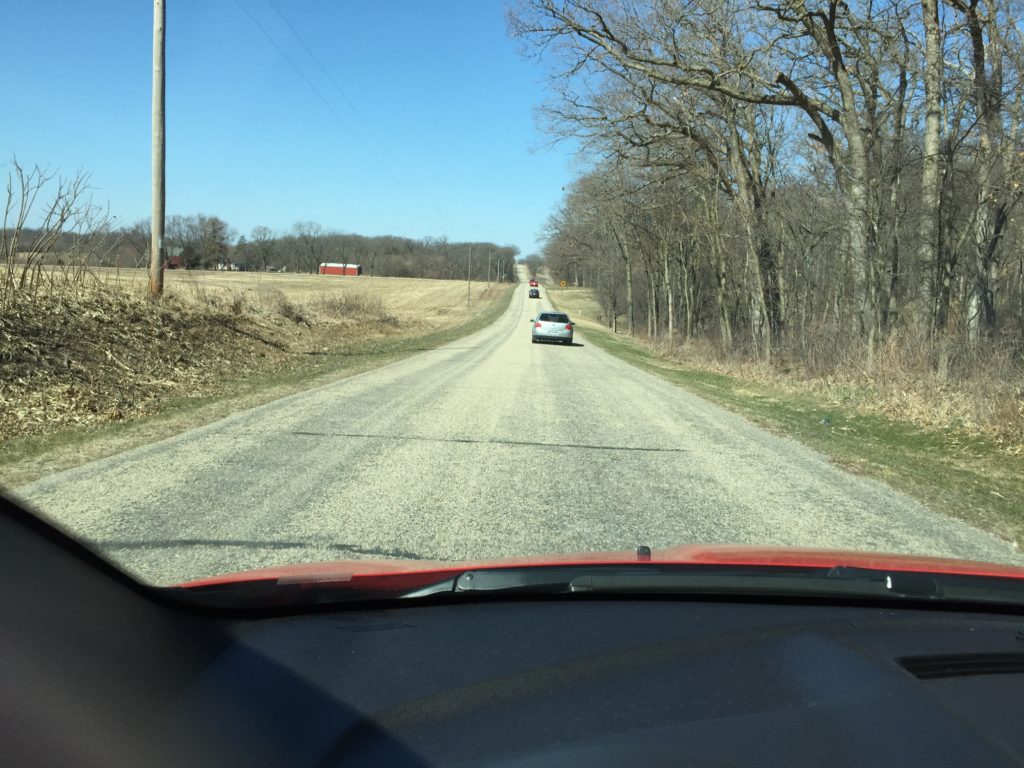 SNOW!!! What snow? On April 7, 2018 the Chicago Region hosted our spring backroads tour. Along with Blackhawk Valley (BVR) and Milwaukee Regions we invited our members to join in on our G.O.A.T.S. (Get Out and Tour Series) backroads adventure. The concept of a tri-region tour type rally was the vision of BVR member Judy Cunningham. She shared her idea with both Chicago and Milwaukee Regions back in January and by late February the date and basic route plans were in place.
The Chicago Region through its rally program has been hosting backroads tours on and off for years.  The rally program had all but disappeared for some time and in October of 2015 John Sutton and Steve Laske created the G.O.A.T.S. (Get Out and Tour Series) and on October 28th of that year hosted the first G.O.A.T.S event with a backroads tour to Rocky Waters Vineyard/Winery in Hanover, Illinois out near the Mississippi River. The Rocky Waters event was a success and prompted John and Steve to continue the series. Now in its fourth year the series has hosted seven backroads tours featuring excellent backroads drives through northern Illinois and southern Wisconsin. Focusing on three staples, cheese, wine, and beer with an end point at a restaurant to provide an opportunity for a great social environment.
Now for the SNOW, what snow, right? It rained and snowed during the week leading up to the tour and we did receive some questions of concern about the weather. It also snowed in the days and weeks following the tour, more so than the week before. The morning of the tour broke to clear skies, and the sun shone for the entire day, but we did have rather cool temperatures. As the day progressed temperatures rose and we reached the low to mid 40’s for a high, not bad considering winter hasn’t released its grip on us. The weather is always a concern, we certainly can’t control it and all we can do is hope for the best. We ran a tour in early April once before and the weather was warm and beautiful.   So we thought we’d get lucky again, we did okay. Of the seven tours run thus far, four of them have had great weather, and three have seen rain. We’ll see what happens this fall for the next tour.
Since the beginning of the G.O.A.T.S. series the tours have been successful with good entry numbers. With each event we have fine-tuned and worked on the details to improve overall outcome of each event. “Backroads the Tour” turned out to be our most successful tour thus far. There were 56 entries, and after cancelations and no-shows we had a car count of 44 the day of the event. The entry numbers from the tri-region concept are encouraging with 14% from BVR, followed by Milwaukee with 6% and then Chicago Region with 23%. The remaining 57% were non-members, which is an excellent opportunity for introducing new people to the club and growing our membership.
The tour was an enjoyable drive on fantastic backroads out in the rural countryside of northern Illinois and southern Wisconsin. The route covered approximately 150 miles with three planned stops. Our first stop was at a cheese factory that has been in business for over 120 years, The “Silver & Lewis Cheese Factory”, Monticello, Wisconsin followed by a very short off route excursion to “Wishful Acers Farm & Brewery” a local craft beer brewer in Lena, Illinois. The last planned stop on the route brought us to “Famous Fossil Winery” in Freeport, Illinois. All three stops provided our guests with an opportunity to sample and purchase local fare and enjoy the day as temperatures climbed. The end point was just a few miles south of our starting point at the “The Firehouse Pub” 10670 Main St., Roscoe Illinois. We had tables reserved at the restaurant where everyone could have a drink, share some stories, spin some tall tales, or just laugh while enjoying everyone for a pleasant mid-afternoon lunch. Consciences of the group was they had a very nice time and are looking forward to our next backroads adventure.
“GOATS”  Get Out And Tour Series