Starters, just another corner worker, or are they?

As a fan there is nothing more exciting than the start of a race, whether it is the 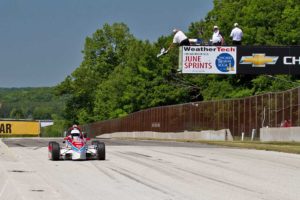 standing start of Formula 1 or Motorcycles, or the rolling starts of IMSA, Indycar or SCCA, it is that anticipation of those cars rolling up to the green flag that sets the tone for the race.

In SCCA racing, it is the Starters specialty who are the ones responsible for starting the race.  We have seen country stars, rockers and politicians all start races for NASCAR, so most think “how hard can it be.” As a wise man once told me “it’s not rocket science”.  It’s not that difficult because most of us who are starters have more than 20 years as corner worker.  What most people don’t realize is that Start is just a corner with privileges.

At Road America, Start is a corner located between 15 and Alpha.  We have the same flags as all other corners, we just get to wave the green at the start, and as long as it isn’t a practice, we are the only ones displaying the checker at the end. Between the start and the finish, we are using the blue flag, keeping lap charts so we know who is in the lead, throwing yellows, debris flags etc., as necessary and waiting, to throw that final checker flag.  We, like everyone else, can’t wait to get to that beer party.

But what makes this corner special is that responsibility to throw the green at the start of the race.  To say that the anticipation of the start is not a big deal, and the reason we do this, would be a lie.  As those cars start coming up the grid, we are watching for the pole sitter, how many cars are in the session, who might be in the back of the pack that we feel might try to jump the start. (And in the days of 100 Spec. Racers, there was antacid to be taken.)  For those approximately four minutes until we hear that the pace car is at 12, all is calm; now it is all business.  We are watching how the cars line up at 14, make sure they are keeping even with the pace car, and then watching that they are all in line.  (The key at this point is to not telegraph when you are going to throw the flag.  It’s important, because my son, who raced motorcycles, always had the advantage on the starts.  It wasn’t until he retired that I told the starter she dropped her shoulder right before she threw the flag and he went on the drop).  When you see that race group in line, and throw that green flag, there is a feeling of accomplishment, especially if they make it through turn 1 without any incidents. 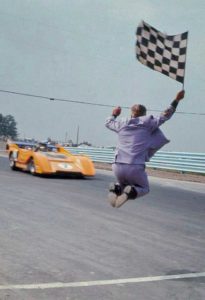 I wish after that we could say we just stand around until someone tells us to throw the checker, but during the session we are a corner with all of a corners responsibility.  We just don’t run to any incidents, but then again, who does get to run to an incident any more.  (sorry, just old corner worker whining).

When it comes to the finish, the number one responsibility is don’t screw it up.  Even though we are tracking the first several positions throughout the race and keeping clocks on the leader, all that can change with an incident on the last lap.  The corners can be our absolute saviors by letting us know what is going on.  For those of you drivers, please paint something interesting on your car to differentiate it from everyone else.  We love the car with the McLaren orange nose to separate it from the other 20 white cars.  When we drop the Checker, like the drivers, there is a sense of satisfaction.

How do you become a starter?  As I said previously, being a corner worker is a great start.  Also, there is a standing joke that to become a starter you have to submit a list of ailments, prescriptions you are currently taking, and a copy of your handicap parking tag.  (We are not old, just experienced) But the bottom line is if you want the experience, let us know, as we consider it the best place you can ever experience to watch a race.  It is the best seat in the house.